The After Trilogy Box Set 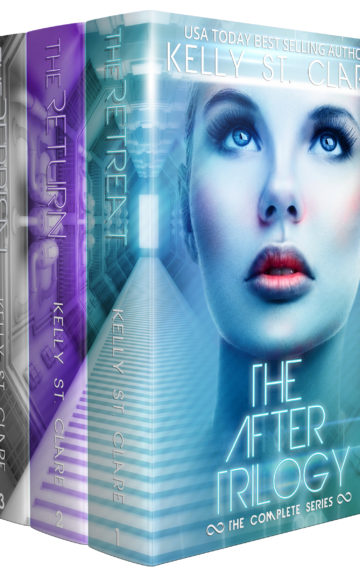 This boxset contains all three books in The After Trilogy and is filled with action, high stakes friendships, and a slow-burn romance.

One hundred and fifty years ago, global warming brought humankind to the edge of extinction. In a desperate bid for survival, four thousand genetically enhanced soldiers—the last slice of humanity—were sent to eight space stations.

When a technical glitch during battle leaves Romy and the four other members of Knot 27 hurtling through orbit towards Planet Earth, Romy knows they are dead one way or another. If the crash doesn’t kill them, post-global warming conditions will.

Yet days pass as Romy wanders injured and aimless through the bush. As she desperately searches for her knot, Romy is found by a grey-eyed man—a mysterious and close-lipped presence she is not certain she can trust. Especially when he shouldn’t even exist.

Secrets are unmasked.
A different version of Earth bursts to the surface.
Will Romy survive the betrayal and lies threatening to shatter her mind like glass?

Earth was ruined. Humankind destroyed. Or so they were told. . . .

Save 22% when you purchase the complete series in this boxset instead of the individual titles!

The Retreat was awarded a Five Star badge from Readers’ Favorite in 2016.

Reviews for The After Trilogy

5 star review by Taking it One Book at a Time

“I had very high expectations for this one and I’m happy to say that the book met them all and more.”